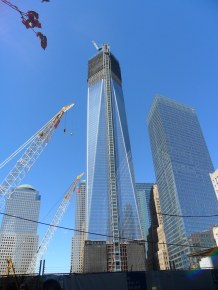 We were living in Indonesia, and many Muslim students opposed the war. Just 50 yards from our office (the only business in town where Americans worked), protestors hung banners stating, “Go to Hell America,” and “George Bush is the great Satan.” We wondered if the demonstration would migrate to our building, and discussed what we should do.

If you were in my shoes, which of these options might YOU choose?

b) stay home from work, and if anyone knocks, answer them in a Russian accent

c) be myself, and proactively look for positive ways to build friendships, even with those who judge me based solely on my nationality

I chose letter “c.” I didn’t defend the decisions of American politicians, nor feel ashamed to be an American. In fact, I told my Muslim friends that I had prayed against the invasion, and now would pray for all those on both sides who would suffer because of it. I assured them that I was an American who loved Muslims and loved peace. And I looked for more ways to actively promote peace.

Not long after that, our Peace Generation educational initiative was launched, with Muslims and Christians working together to train the younger generation in how to develop peaceful, mutually supportive, loving relationships with those who are different than you. Our PeaceGen went on to train thousands of youth and win a national award for peacemaking.

In the face of hatred, stereotyping, prejudice, and even potential threats, I chose to move TOWARD those whose hurt and anger had blinded their eyes from seeing me clearly—as I got closer to them, their eyesight cleared, and we became friends.

In 2001, another American went through a similar situation. As a 16-year-old girl, Hanadi watched from her high school classroom window when the second plane crashed into the World Trade Center. Immediately aware of the potential danger, the staff began to evacuate the students from this K-12 New York City school.

But Hanadi was still in the school yard shepherding small children when people began throwing glass bottles and pieces of pork at the students—simply because it was a Muslim school.

In the days that followed, Hanadi and her classmates, many of them born and raised in America and no less Americans than I am, were harassed, bullied, and belittled frequently. These kids had never met a terrorist, but were treated as though 9/11 was somehow their fault.

This unconscionable behavior could have driven Hanadi to defend her religion with vengeful, violent means. It could have driven her to hide in her home, or only go out in public without her headscarf to avoid persecution.

Instead, Hanadi chose like I chose, to be herself, and to proactively look for positive ways to build friendships, even with those who judged her solely on her religious affiliation. She decided to move TOWARDS those whose eyes were clouded with pain and anger. She joined Park 51.

About 3 blocks from the tragedy of Ground Zero, a small seed of hope is sprouting—a community center, founded by Muslims who abhor terrorism and love peace, seeking to rebuild the community upon the values all Americans cherish: freedom to be yourself, while uniting with others from many backgrounds to make our community and our nation a better place. It’s a place for Muslims to come and pray and to hear sermons that promote peace and unity. It’s a place for non-Muslims to come and share and be welcomed in as friends. And it’s a place for all kinds of community classes or gatherings, many of which have nothing to do with Islam, and everything to do with enriching the lives of the whole community.

The victims of the WTC tragedy weren’t just those who died in the building—they were also thousands of American Muslims around the country who were unjustly persecuted. Many lost businesses or jobs, lost friends, were threatened, beaten, treated as exiles in the very communities they had loved and served.

Some people (even Christian leaders) have overlooked this stain on the American conscience, choosing to focus only on the fall of the towers. They think that those victims of the 9/11 attacks are better honored by distancing ourselves from all Muslims. I say that the only way to move forward in healing is to find those people (Muslim, Christian, anyone) who are committed to peace and rebuild our hurting community together. I’m blessed to see Hanadi leading the way—who will join her?

Sometimes a broken place in us, when healed, can grow even stronger than it was originally. This is my hope for New York City. It was an honor for me to present a copy of my book to Park 51, and to pray for God’s blessing upon their beautiful vision for peacemaking.