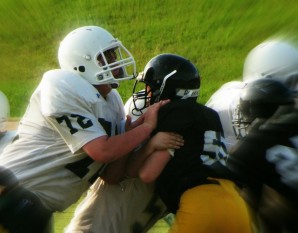 One of the biggest stories in the news right now is about the professional football player, Ray Rice. Video tape shows him back in March brutally punching out his fiancé (now his wife) and dragging her unconscious body out of an elevator.

The response of the National Football League at first was to suspend Ray for two games. After a deafening chorus of protests, the NFL changed their punishment to suspend Ray indefinitely, and his club fired him. Much of the discussion has been centered on the NFL’s poor first response, and on how harshly the NFL should come down on domestic violence.

Now I normally blog about peacemaking between Christians and Muslims—what does this case from football have to do with peacemaking?

The answer is, no matter what the problem is, harsh punishments or violent responses don’t get to the root issues. They make the punisher feel self-righteously justified and, in this NFL case, distanced from the perpetrator. But they don’t solve the problem.

Now Ray Rice is unemployed and rejected by his community. How will that help him overcome the anger that is stored up inside him? Does this provide more protection or hope for his wife? Aren’t we setting Ray up his frustration and hopelessness to explode again?

Here is what I think the NFL should have done—the commissioner should have called a press conference and announced the following:

“I met personally with the player, Ray Rice. I met with his wife, the victim. I met with the owner and coach of his team. Then all of us came together to discuss the best way to proceed forward.

“Ray’s wife did not want to file criminal charges against her husband. If she had, we would have supported that. We did not try to influence her decision at all. Since she chose not to, we want to support her with the strongest possible motivation and help for Ray to overcome the internal issues that led him to domestic violence and ensure it never happens again.

“All of us, including Ray, his wife, the team’s owner, his coach, and myself representing the NFL, have agreed upon the following plan for helping Ray:

“1) Ray will be suspended from practicing with the team for a period of 60 days in order for him to focus his time on personal and marital counseling. After 60 days if his counselor and wife recommend it, he may rejoin the team’s practice sessions as long as they don’t conflict with his ongoing counseling schedule.

“2) Ray will be suspended from playing with the team for a period of 1 season. He will remain a part of the team, and receive only the base salary of the lowest paid member of the team for this year. The balance of his unpaid salary will be used for counseling for Ray and his wife.

“3) Ray has 10 days to submit to us his preferred counselor or combination of counselors for approval by the NFL, his team and his wife. If he does not submit this request within 10 days, or if he does not attend the counseling sessions scheduled for him, he will lose his job with the football team and will not be allowed to be picked up by another team until the NFL gives approval for reinstatement, which will be based upon our assessment of his seriousness in resolving the anger issues that led to domestic violence.

“The message that we want to send to this nation is that domestic violence is a horrible tragedy that results from someone who doesn’t handle anger appropriately. The NFL will not field players who abuse others, especially their own loved ones. But we are a community who cares deeply about our players and are committed to helping them face their inner struggles and overcome them in appropriate ways, so that in next 50 years of life for our players, like Ray Rice, domestic violence will never be an issue for them and their families again.”

Can you see the difference between punishment, which isolates and impoverishes, exacerbating the very causes of the violence, versus caring enough for the perpetrator to help him overcome the root issues that caused the violence? When prisoners get released from Guantanamo Bay, do you think they are likely to hate America more or less? Violence comes from anger, from hatred, so the answer to it must be to overcome the anger and hatred with compassionate help in the context of a supportive community.

For those of you wondering when the sequel to my novel will come out, I’m working on it! And it addresses some of these topics above. More news on that later…

Today, I encourage you to show love to your family, and be willing to ask for help for any inner issues that are building inside of you before you explode and hurt someone you care about. Peace.