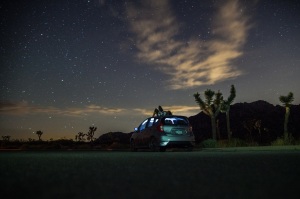 2:00 AM. A deserted stretch of Texas highway. My five younger siblings and I stand amidst the tumbleweeds watching our widowed mother pray over our broken-down car.

Finally, we spot some headlights approaching. We desperately wave our fourteen hands. A red sports car slows, and pulls over behind us. Praise God, we’re saved!

Out of the car climb two of the biggest black men I have ever seen. Media stories about highway robberies bombard my mind. I’m the oldest male—what would I be willing to do to protect my mother, younger sisters and toddler brother?

“You guys need some help?” one of them asks.

After trying unsuccessfully to start our car, those two put their bulging muscles to good use, pushing our car a mile down the freeway to an exit ramp where we roll safely into a gas station adjacent to a motel. Then they walk the (extra) mile back to their car.

Twenty-five years later, that extraordinary act of kindness to strangers still causes me shivers of sheer wonder. It was one of those God-encounters that chipped away at prejudice in my heart, and led me down the peacemaking path I’m on today.

Thomas Cahill reminds us of a similar story where the hero turns out to be someone the audience would never have expected—the Good Samaritan:

“As we stand now at the entrance to the third millennium since Jesus, we can look back over the horrors of Christian history, never doubting for an instant that if Christians had put kindness ahead of devotion to good order, theological correctness, and our own justifications—if we had followed in the humble footsteps of the heretical Samaritan who was willing to wash someone else’s wounds, rather than in the self-regarding steps of the priest and the immaculate steps of the Levite—the world we inhabit would be a very different one.” (from Desire of the Everlasting Hills, New York: Doubleday, 1999. p.185)

In the midst of our theological debating, our crusading for justice, and our pursuit of the next great Christian conference, we’re in danger of provoking our culture to close their ears to our message, which sounds like a “resounding gong or a clanging cymbal,” because their eyes don’t see our acts of love (I Corinthians 13).

People will never see Jesus in us apart from kindness. Let us be humble enough to learn from Samaritans—from those of different ethnic or religious backgrounds than us. Some of the kindest people I’ve ever encountered have been Indonesian Muslims and Japanese Buddhists, both of whom revolutionized my concept of showing hospitality to strangers.

Or perhaps we could be humble enough to learn from those Americans we’re not likely to meet in our church, such as talk-show host and stand-up comic Ellen Degeneres, who says, “Most comedy is based on getting a laugh at somebody else’s expense. And I find that that’s just a form of bullying in a major way. So I want to be an example that you can be funny and be kind, and make people laugh without hurting somebody else’s feelings.”

Let’s have the humility to recognize that there are people who don’t believe the same theology we believe, but are following Jesus’ example of compassion, mercy and kindness better than we do! I think we should honor them (as Jesus did in his story), and get inspired. If Jesus can’t take us to a higher plane of self-less love than the world already demonstrates, what do we really have to offer?

How about we confront the world’s issues of prejudice, violence, racism, sexism, xenophobia and terrorism with a movement of 2 billion Christians showing extreme kindness to everyone? Wouldn’t that rock our world!

As one of the kindest people our generation has ever seen, Mother Teresa, once said, “Not all of us can do great things. But we can do small things with great love.”

By pushing a stalled car, helping a crime victim, or even telling a joke kindly, thousands of people are already out there making the world a better place. It’s time we joined them.