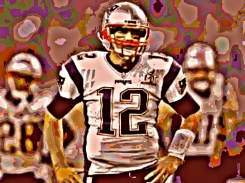 Tom Brady didn’t decide at age 38 that he’d better eat healthy foods and work out more if he hoped to play football into his 40’s. He’s been doing it for years. While other athletes’ careers are being shortened by a carousing nightlife, Tom usually has dinner with his family, reads his kids a goodnight book, then goes to bed around 8:30 so he can be rested for his 5:30 a.m. workout. Keeping this routine over the past several years is paying dividends today.

That’s what New Year’s resolutions are all about. They’re a chance to evaluate if the path we’re on will ultimately lead us where we want to go.

I was reminded this week that not everyone gets to see the wonderful results of their good choices in their lifetimes. In the Bible, Hebrews 11 talks about religious heroes such as Abraham, Moses and so on who didn’t get to see all they hoped for, but their descendants did. In modern times, there are those like Van Gogh, who were only appreciated after their deaths, or those who died too young, like another football star, Pat Tillman, who walked away from a $3.6 million contract with the NFL’s Arizona Cardinals to serve in the military after 9/11.

“Sports embodied many of the qualities I deem meaningful,” Tillman explained. “However, these last few years, and especially after recent events, I’ve come to appreciate just how shallow and insignificant my role is . . . It’s no longer important.”

Tillman’s several tours of duty in Iraq and then in Afghanistan where he was killed in action earned him both a Purple Heart and Silver Star.

Not all of us will get to see the results of our sacrifices. But our children will. And perhaps generations to come will find hope and inspiration from our lives.

When we do get to reap from the good that we sowed in earlier years, it reminds us that sacrificing is worth it; living out our calling in life is worth it. And it motivates us once again to sacrifice today for the sake of tomorrow.

This New Years Day, I was blessed to receive another award for one of my novels. A WAY OUT OF HELL won the 2017 Book of the Year award for Christian Suspense. But more meaningful than the award is every time a reader tells me how their entire paradigm regarding Muslims has been changed, and that they’re ready to open their hearts to love their Muslim neighbors.

What can we do this year to fulfill our callings, to bring light and life to those around us, to use our voices for those who have no voice, to manifest on the earth God’s desire for “peace on earth, good will to men”?

Jim Baton (pen name) has spent over 25 years living in the Muslim world, where he’s been involved in a variety of peace and reconciliation activities including interfaith dialogue, training elementary through university students in peace principles, and bringing Christians and Muslims together to pray. Jim's writing, speaking and teaching is helping Christians and Muslims build bridges of understanding, love and prayer both in Muslim nations and at home in America. His novels contain a depth of understanding regarding the roots of the Christian and Muslim conflict, how to bring healing to Abraham’s broken family, how to combat terrorism with non-violence and love, and how to become a true peacemaker. View more posts

One thought on “Reaping in the New Year”