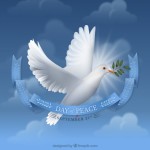 The United Nations has declared this Thursday, September 21, as an International Day of Peace. The theme this year is “Together for Peace: Respect, Safety and Dignity for All.” Special attention will be directed toward displaced peoples.
UN Secretary-General António Guterres offers this exhortation: “In times of insecurity, communities that look different become convenient scapegoats. We must resist cynical efforts to divide communities and portray neighbours as ‘the other’. Discrimination diminishes us all. It prevents people — and societies — from achieving their full potential.” He added, “Together, let us stand up against bigotry and for human rights. Together, let us build bridges. Together, let us transform fear into hope.”
Check out this short video of Yusra, a Syrian refugee who competed in the most recent Olympics! She wouldn’t have made it without the help of others. Now more than other, the world is recognizing that Jesus’ directive to “love your neighbor” is our world’s only hope.
My friend Rebecca took a risk and loved her neighbors this week in Columbus, OH, where angry protesters threatened Muslims going to their Friday noon prayers at the mosque. Rebecca took her baby and rallied some friends to stand together on the sidewalk as a human barrier just to make sure her Muslim neighbors could navigate the protest safely.
The protesters, a group by the name of “Real Street Preachers,” used a bullhorn and the Bible to condemn the Muslims and graphically insult anyone who stood with the Muslims.

Rebecca adds, “At one point, I was able to have some reasonable conversation with one protesting man, about 40 years old. As I looked into his calm blue eyes, I thought, ‘He looks so normal.’

“Later, describing it to a friend I said, ‘If I met him in Starbucks, I’d not know he was any different than me.’ He spoke with me, vacillating between a level tone and yelling at passersby, ‘I’ve been doing this since 2010. I know you guys don’t see it this way, but we are loving them… Muslims go to hell! …It’s tough love… You’re all going to hell!’

Just like Jesus, Rebecca chose to express her love by standing against the Pharisees throwing stones and standing with the condemned woman; by choosing self-sacrifice that others might be free. I just hope the Muslims affected by this event go home knowing the true Jesus through Rebecca’s love rather than the crass, condemning Jesus of the “Real Street Preachers.”
SPECIAL OFFER — All my e-books are half price this week for International Day of Peace!
If you’ve read one of my books but haven’t picked up the other two yet, this week only all 3 e-books are on sale half price! That means Someone Has to Die (Peace Trilogy Book 1)

is only 99 cents, while A Way Out of Hell (Peace Trilogy Book 2)

are only $1.99 each!
Let’s all celebrate this International Day of Peace by loving someone different from us, and coming TOGETHER.